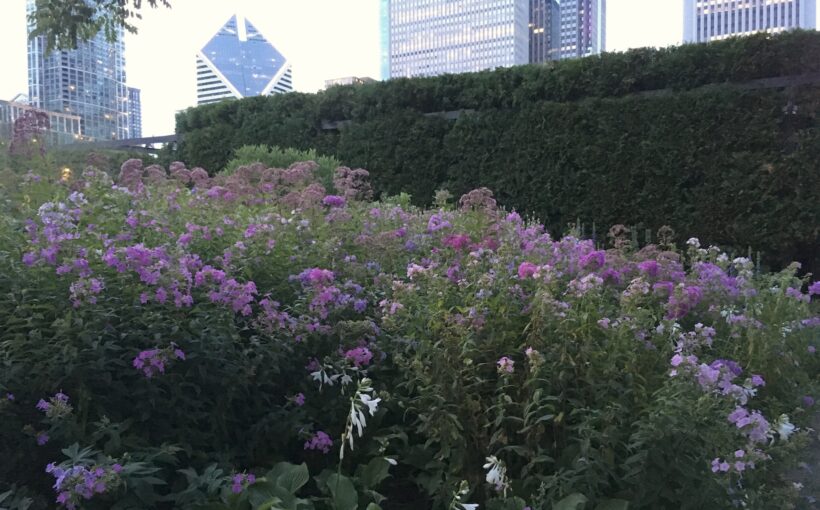 Evergreens are a go-to method for creating winter interest in the garden. Alas, climate change means that some old standbys are no longer suited to our central Indiana location. As our area becomes warmer and wetter, plants that hail from higher and drier elevations have become short-lived here.

But fear not! We’ve rounded up some favorite evergreens that still perform admirably in central Indiana. Add some to your yard and enjoy the results all year long.

The false cypresses (Chamaecyparis spp.) are scaled evergreens. Instead of having needles like a pine tree, the branches are made up of tiny overlapping scales. The genus name Chamaecyparis reflects their size as shrubs or small trees (chamae=dwarf; cyparis=cypress), so they’re a good fit in tight spaces. 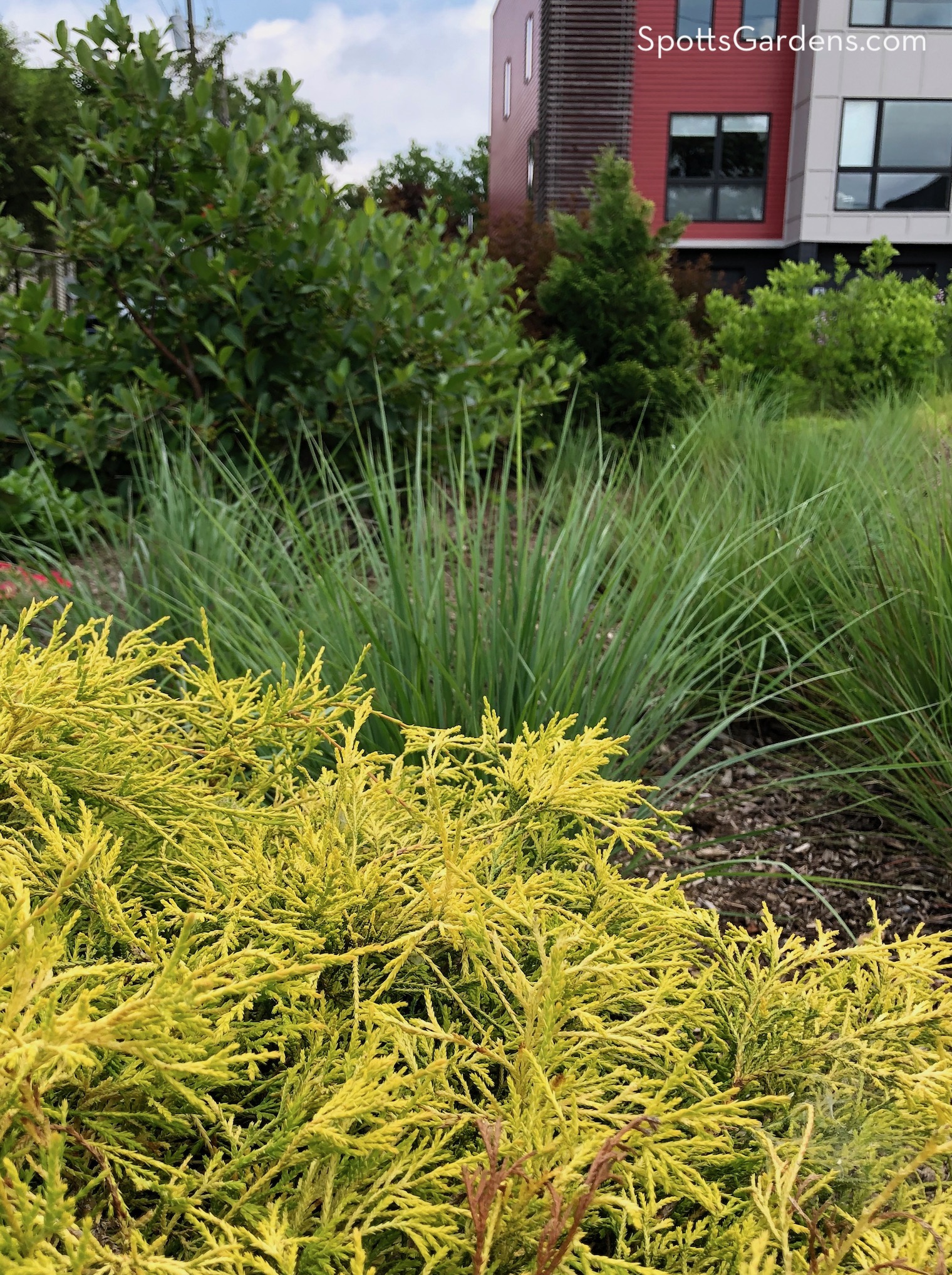 With colors ranging from the yellow of ‘Golden Mop’ to the blue tint of ‘Boulevard’, Chamaecyparis pisifera is terrific for adding color to the winter garden. Make the most of the foliage by juxtaposing it with true-green evergreens. You’ll find three kinds of textures:

Native to Indiana, Juniperus virginiana is one of the toughest evergreens we’ve found. It prefers full sun and can handle nearly any soil, as long as it’s not consistently wet. It’s drought tolerant, resistant to deer, tolerant of black walnut, and shrugs off air pollution.

What we’re saying is, Eastern red cedar is a survivor. It can handle hotter and drier spots than most evergreens. It’s a pioneer species, one of the first to move into a meadow and start the evolution into forest. It also reseeds easily; you’ll often find seedlings scattered throughout any garden that contains one. 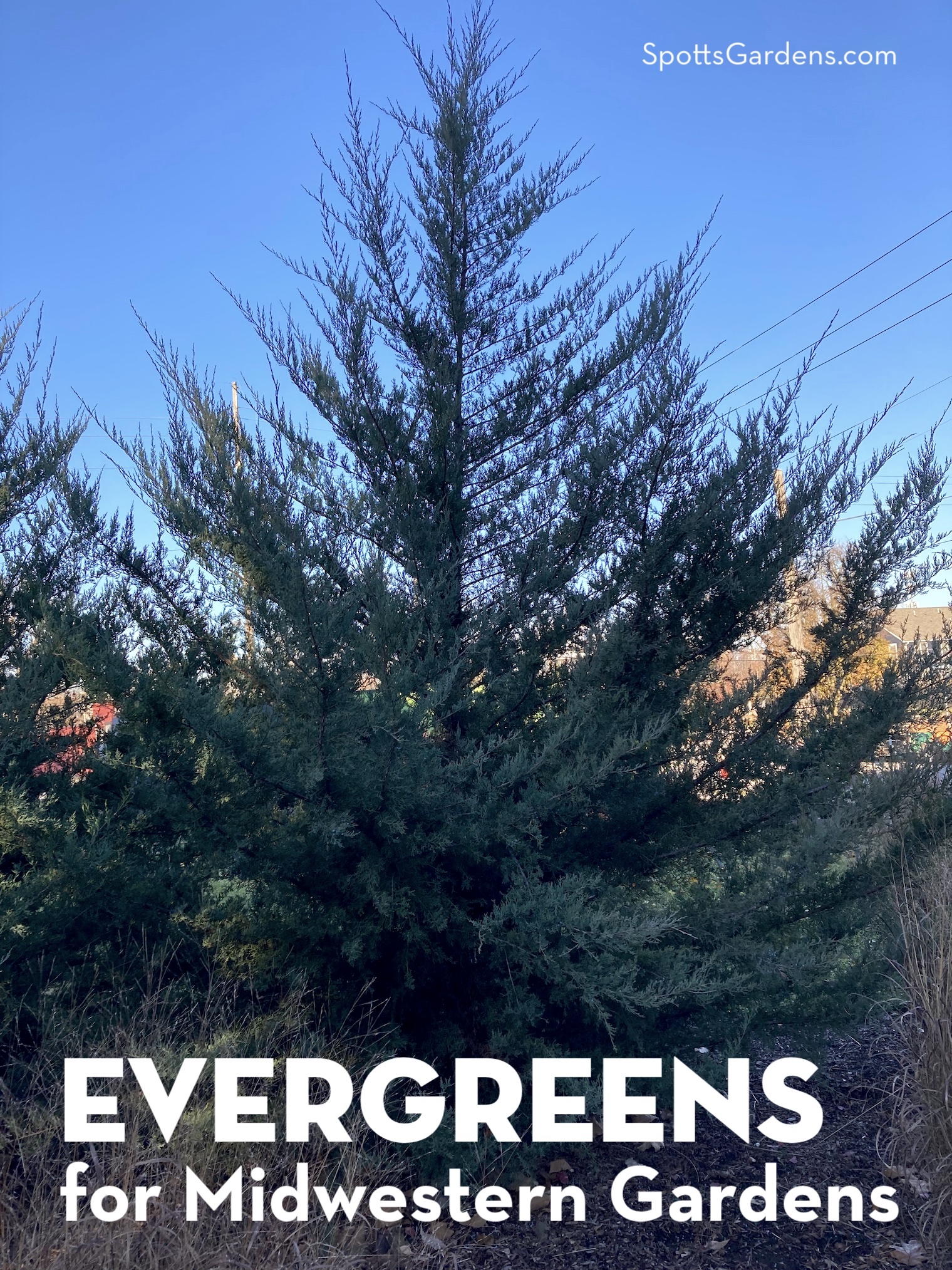 Because this scaled evergreen is dioecious, with male and female flowers on separate plants, you’ll need at least one of each gender to get the blue fruits. The fruits aren’t berries, but berry-like cones that birds love.

Don’t plant Juniperus virginiana if you have apple trees; like many junipers, it’s a host plant for cedar apple rust.

Taxus x media prefers full sun to part shade. It’s one of the very few evergreens that can tolerate heavy shade, although its growth will be less dense. It likes average soil and can take some drought. Wet feet will kill it, so don’t plant it in boggy spots.

This needled evergreen is dioecious, so you’ll need both male and female plants to get the bright red fruits. These fruits are actually a modified cone rather than a berry, and birds love them. All parts of the yew are toxic to humans. 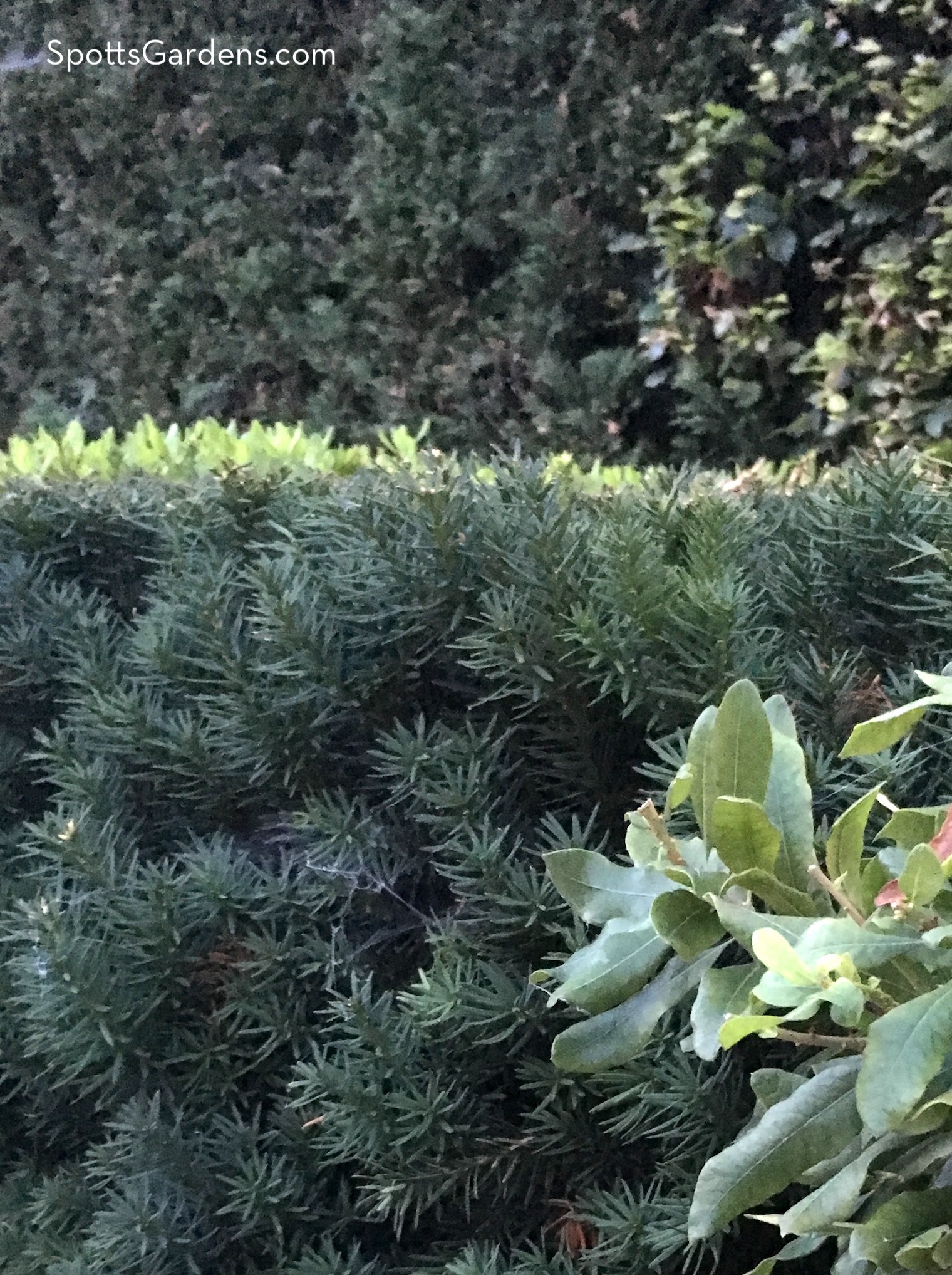 When planting yew, remember that it is a bigger plant than you think it is.  If you use yews as a foundation planting, you are committing to thirty years of regular pruning for size control. So look carefully at the mature size of the cultivar you’re considering, and match it as nearly as possible to the location you plan to use it.

We like yew best when it’s allowed to relax into its natural shape. But because takes pruning and shearing well, it’s also a great choice for fancy treatments like formal hedges and topiaries. If you’re planning to shape yew into a hedge, begin pruning the same season you plant, and plan to shear frequently.

The most common cultivars are:

Popular and easily available, Thuja occidentalis is flexible enough to be used in most gardens. Thanks to the many cultivars, this native, scaled evergreen can be used in tighter places than most other evergreens.

Arborvitae does best in full sun, but it can also handle light shade. It prefers well-drained, moist soil, but is tolerant of even wet soils and humid summers. It doesn’t take kindly to hot and dry though, so we avoid using it against southern or western-facing brick walls that will act like an oven.

Arborvitae is resistant to black walnut and air pollution both. Deer find it a tasty snack, so avoid using it if you have heavy deer pressure. 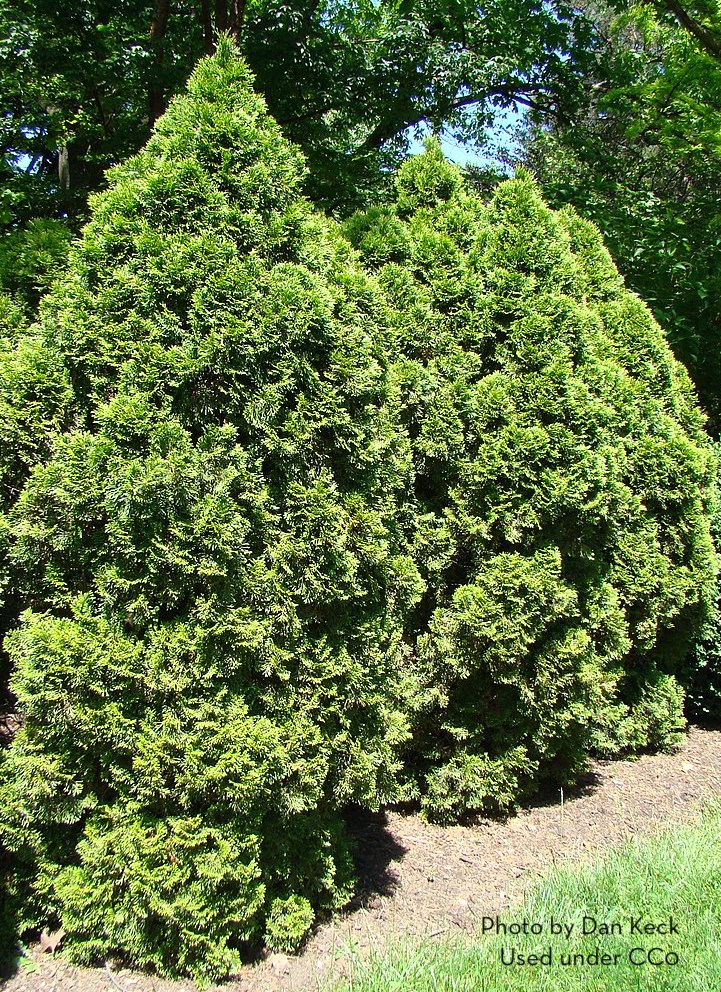 Unlike the vast majority of designers, we prefer not to use arborvitae for hedges, whether sheared or in its natural form. We find that inevitably one tree will die, making a visible dead spot or hole in the hedge. Instead, we use it as singles or in natural-looking clusters. If you want a hedge, yew (Taxus spp.) is usually a better choice here.

How successful you are with arborvitae depends on how you plant it. Avoid very hot and dry spots. It prefers a loose, rich soil. Don’t plant it in new construction or worn-out soil in established gardens without loosening the soil and improving it by adding compost.

Another common issue with arborvitae is winter injury. Water your arborvitae well throughout the growing season to ensure it is well hydrated going into winter; that helps to head off salt injuries and desiccation.

Native to Indiana, Tsuga canadensis is terrific in shade to part-shade areas. The needles are short and soft, and it produces huge numbers of tiny cones that provide seed for birds and wildlife. Its lacy, airy look makes Canadian hemlock ideal for Japanese-inspired gardens as well as woodland areas. It’s both deer resistant and black walnut-tolerant.

Canadian hemlock prefers average, well-drained soil. We’ve also found it to be tolerant of damp soil like creek beds, but it can’t take boggy, consistently wet soil. It doesn’t like drought, so be prepared to water during dry spells. Plant it in a spot that’s sheltered from harsh winds. 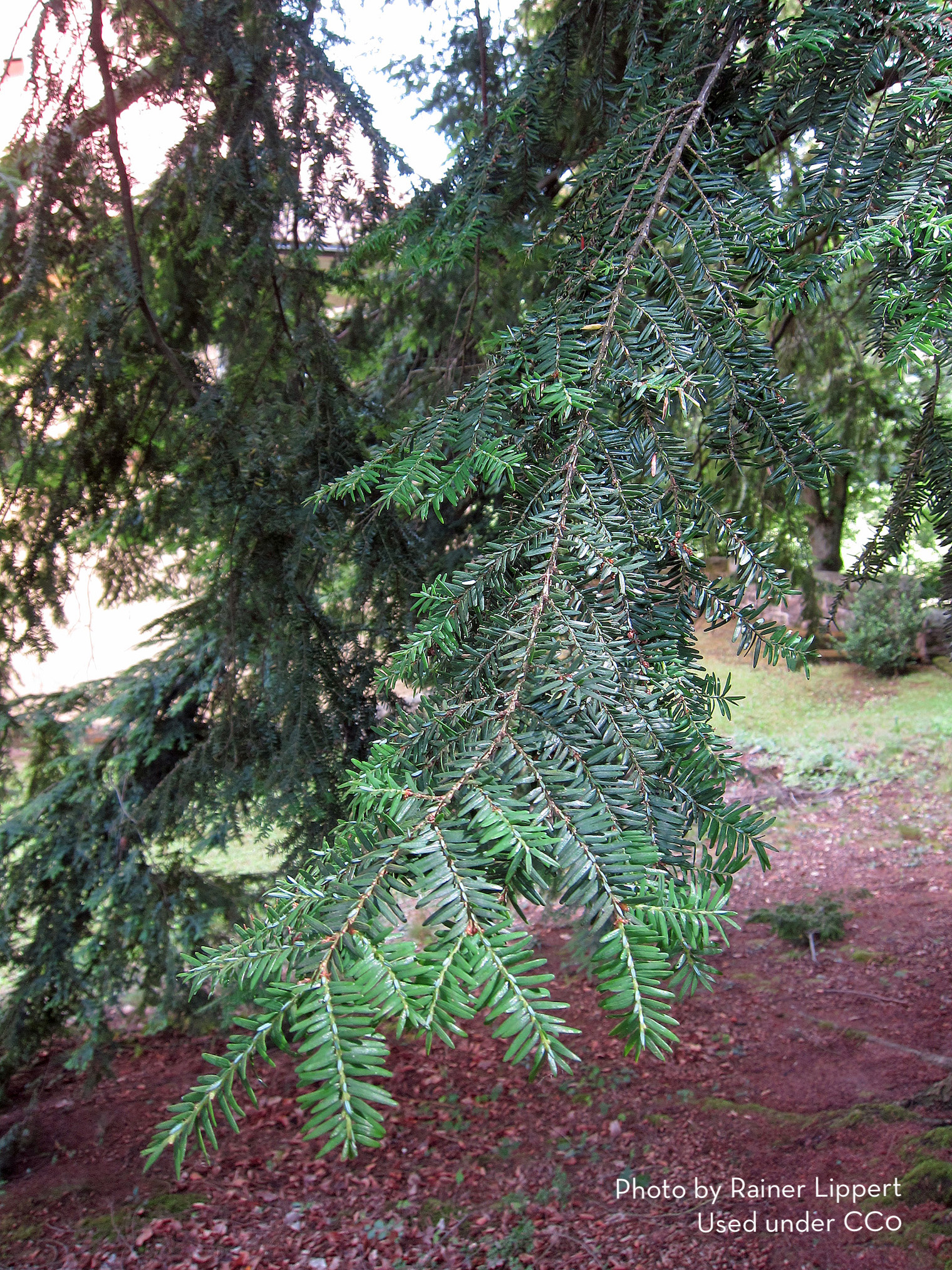 While you can trim hemlock into a formal hedge, we think it’s at its best in its natural, pyramidal form. The straight species can grow from 40′ to 70′ tall and 25′ to 35′ wide. The weeping ‘Pendula’ is particularly great as a specimen; we like to plant this 4′ to 5′ tree where it can cascade over a large boulder. Common shrub forms include ‘Gentsch White’ (3′ to 4′ with white tips), ‘Jeddeloh’ (2′ to 3′ tall), and ‘Cole’s Prostrate’ (a tiny weeping form only about 1′ tall).

Hemlock’s main pest is the fatal hemlock woolly adelgid (HWA). As of right now, it is not present in Indiana in any significant numbers, but it’s likely to become a problem in Indiana in the future.

Add Evergreens to Your Garden

We can help you choose just the right evergreens for your outdoor space. Contact us today and tell us about your garden!