Keep Cool with an Energy-Efficient Landscape 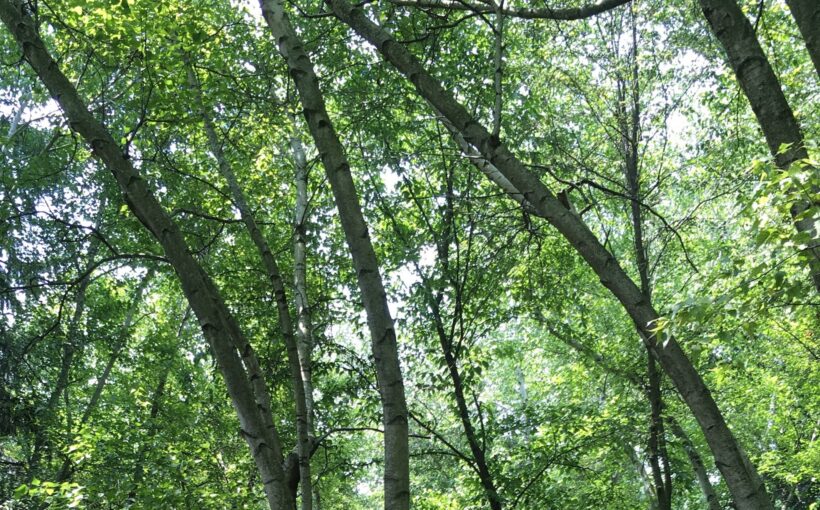 Smart planting strategies can actually reduce energy costs! An energy-efficient landscape uses trees, shrubs, and vines strategically placed to cool the house in hot temperatures but allow the sun to warm it in winter.

Cities are hot, and getting hotter. The built environment absorbs heat during the day, making city streets and sidewalks feel sweltering. At night, the concrete releases that heat, keeping the nighttime air temps hot instead of letting them cool. As a result, cities are actually hotter than surrounding areas, a phenomenon known as the “heat island effect.”

The increased heat in cities ratchets up the amount of energy it takes to keep buildings cool. But trees and other plants can mitigate this effect, reducing energy consumption. 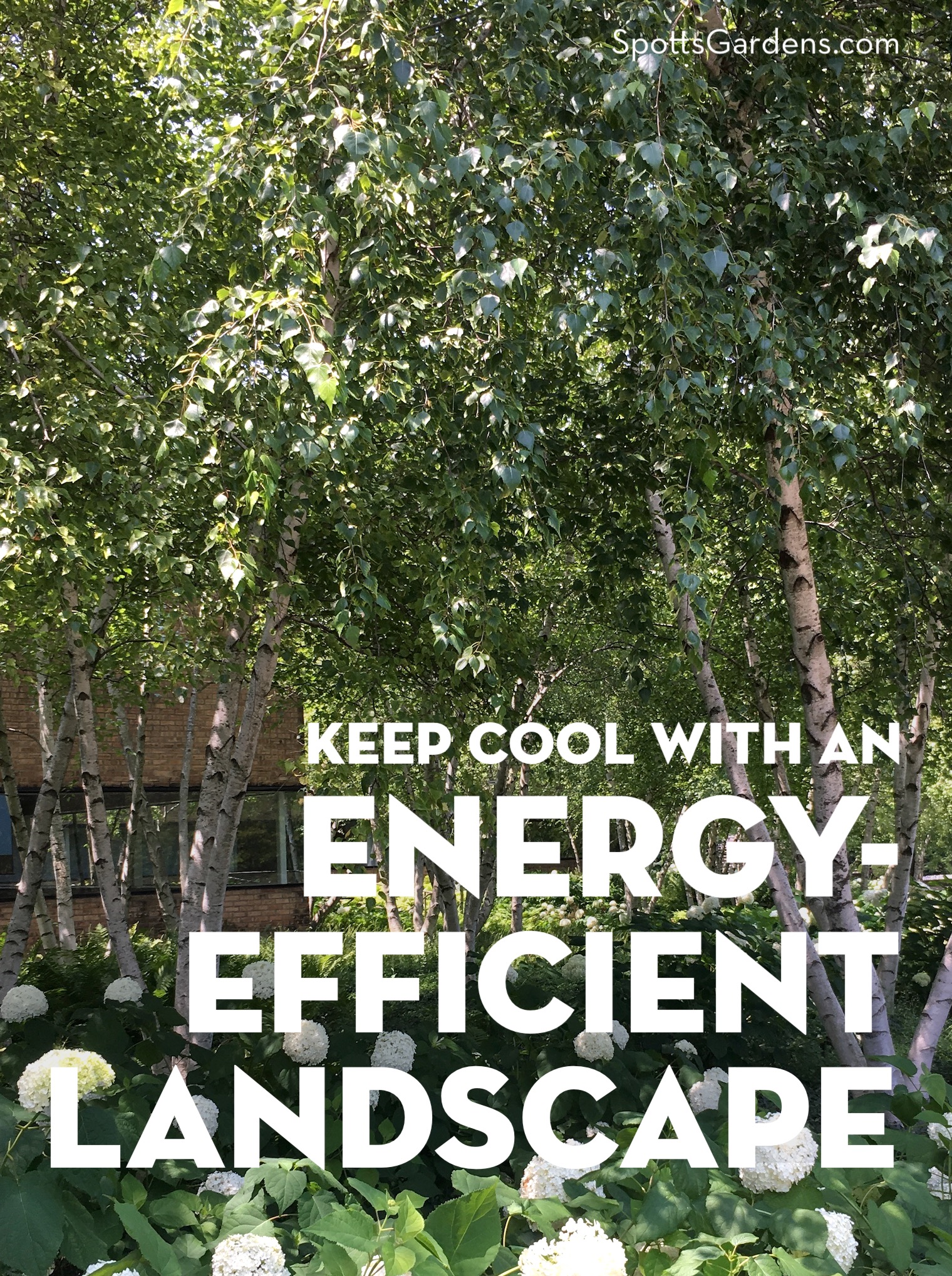 Using Trees, Shrubs, and Vines to Cool the House

Plants cool air temperature by directly shading surfaces and through transpiration, the process of pulling water from their roots and moving it to their leaves to be evaporated as water vapor. Between shading and transpiration, trees can reduce the air temperature around them by 6 degrees Fahrenheit. And because cool air settles closer to the ground, the air directly under a shade tree can be as much as 25 degrees Fahrenheit cooler than the air above a nearby blacktop!

This cooling of air is cumulative, too. The more trees in a given area, the cooler the air is for the whole neighborhood. A recent study found that blocks with tree canopies that covered more than 40 percent of the area had a substantial reduction in daytime temperatures. 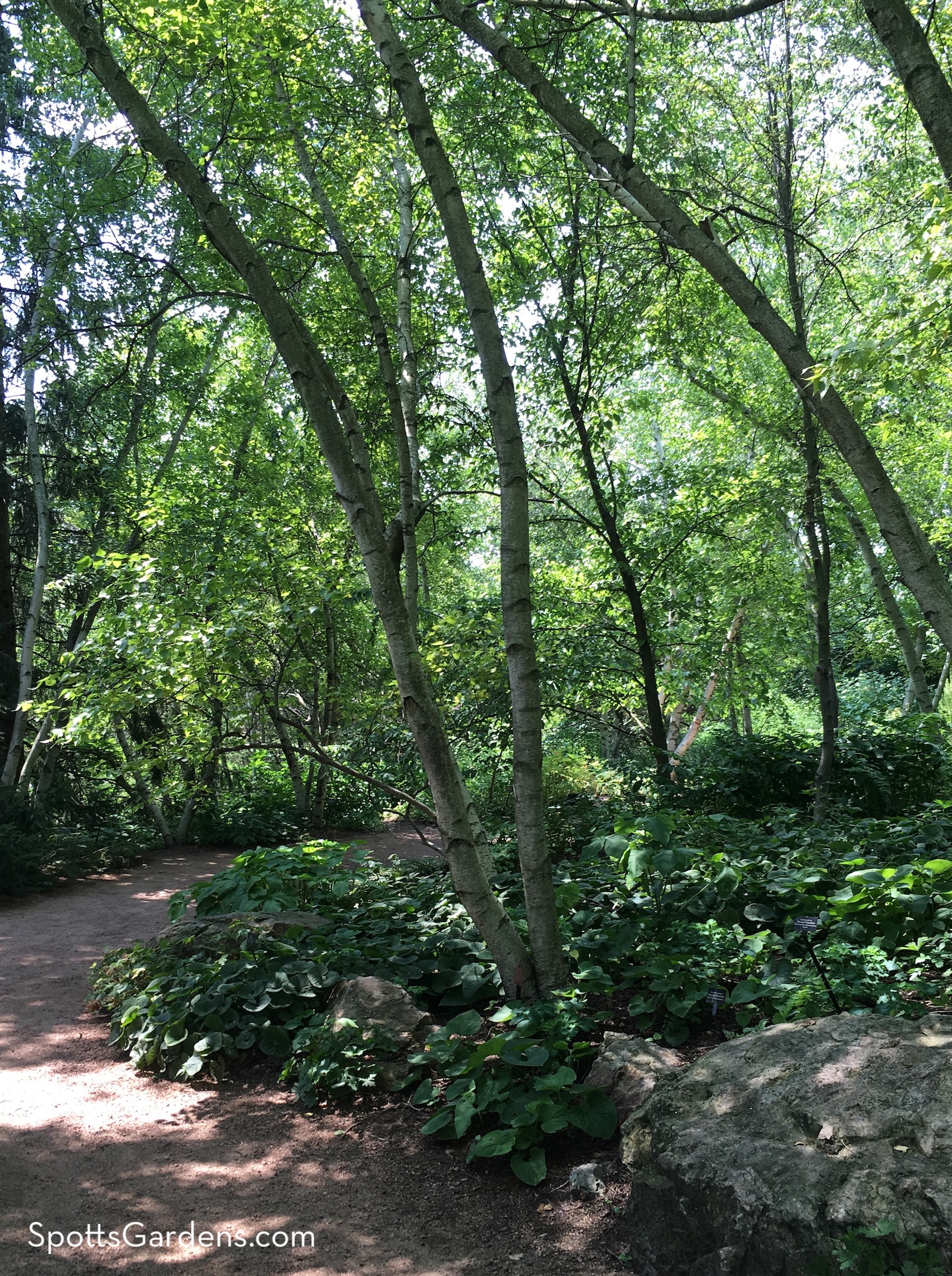 Our suggestions for an energy-efficient landscape are geared toward homes in central Indiana, which the U.S. Department of Energy classifies as being in a “cool region.” Those in temperate, hot-arid, and hot-humid regions should check out strategies suitable for their areas. For more information about using plants for energy efficiency, check out Energy-Wise Landscape Design, by Sue Reed.

The primary framework for these strategies is to shade the house and surrounding areas from southern and western sun in summer, but allow winter sun to warm the house. The sun sits at a lower angle in the sky in winter, so it can shine through leafless branches and into windows to warm up those rooms during the colder months.

If you already have mature trees, take good care of them! Have an arborist check them out every ten years or so. Even if they aren’t shading the house, those trees are cooling the area around them, acting as a carbon sink, and managing stormwater runoff. You want them to live a long, healthy life.

If you’re going to have any kind of construction done, design around the existing shade trees. Make protecting your trees a priority. Don’t allow heavy equipment to run over their root zones or contractors to compact the soil.

In central Indiana gardens, choose plants hardy to zone 6. Match the plants to the sun and moisture conditions in your garden. We recommend you center your energy-efficient landscape on native plants, as they support many more pollinators than non-natives do.

Site your trees and shrubs carefully based on their mature height and width so they don’t become too big and have to be cut down.

Plant Large Trees Away from the House 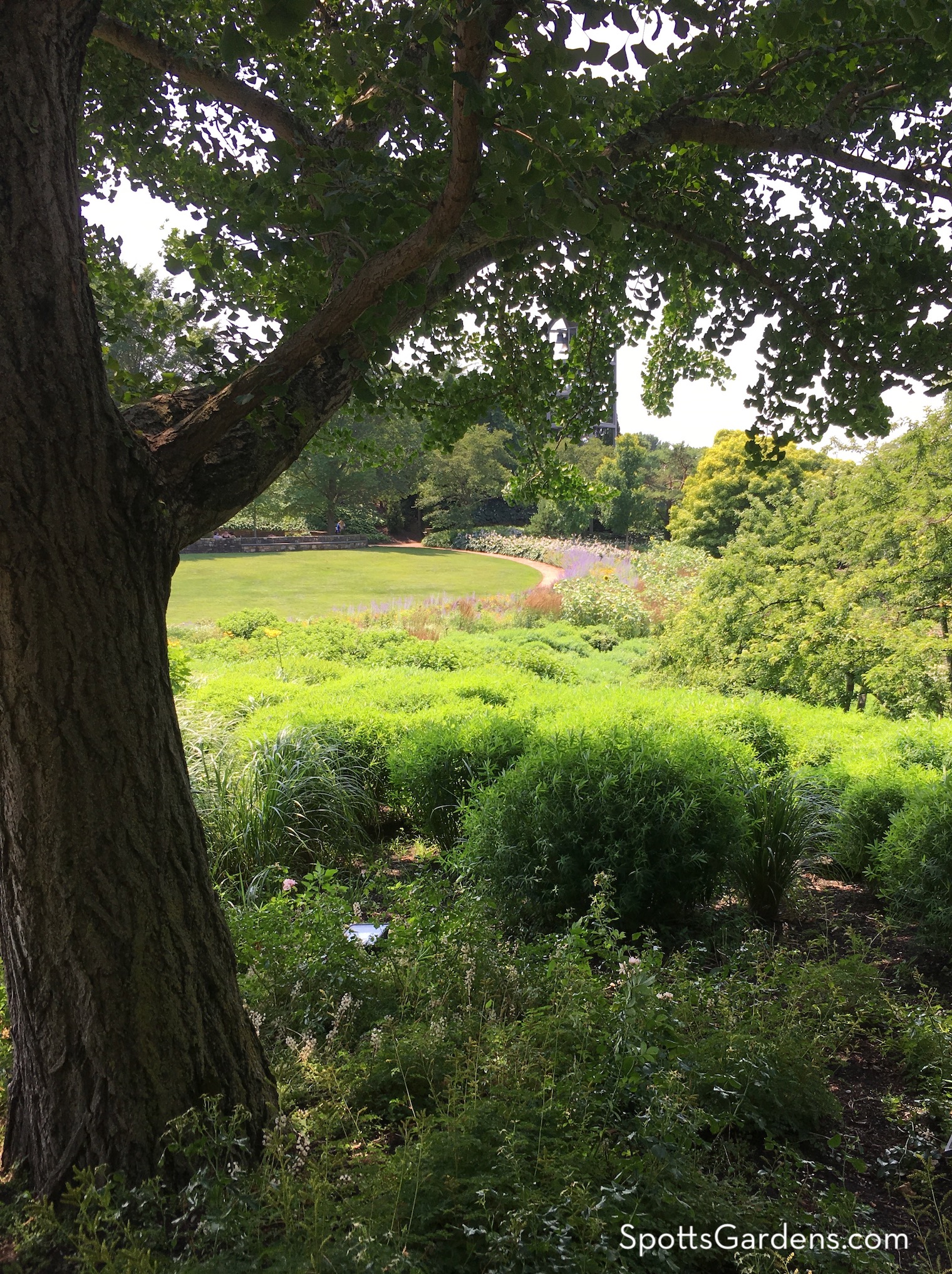 Use Smaller Trees and Shrubs Closer to the House

Whether you have room for large shade trees or not, you can use smaller trees and shrubs for shade close to the house.

Consider using small trees close to the south side of the house so they can shade the walls and windows from the near-vertical summer sun rays. The lower rays of winter sun will come right through their leafless branches.

Great trees for this application include those with open canopies and slender limbs. Consider full-sun trees like native serviceberries (Amelanchier spp. like the one in the picture above), native redbuds (Cercis canadensis cvs.), and native witch hazel (Hamamelis virginiana).

If you have or are planning to install solar panels, use trees that are shorter than the roof line so you don’t shade the panels. 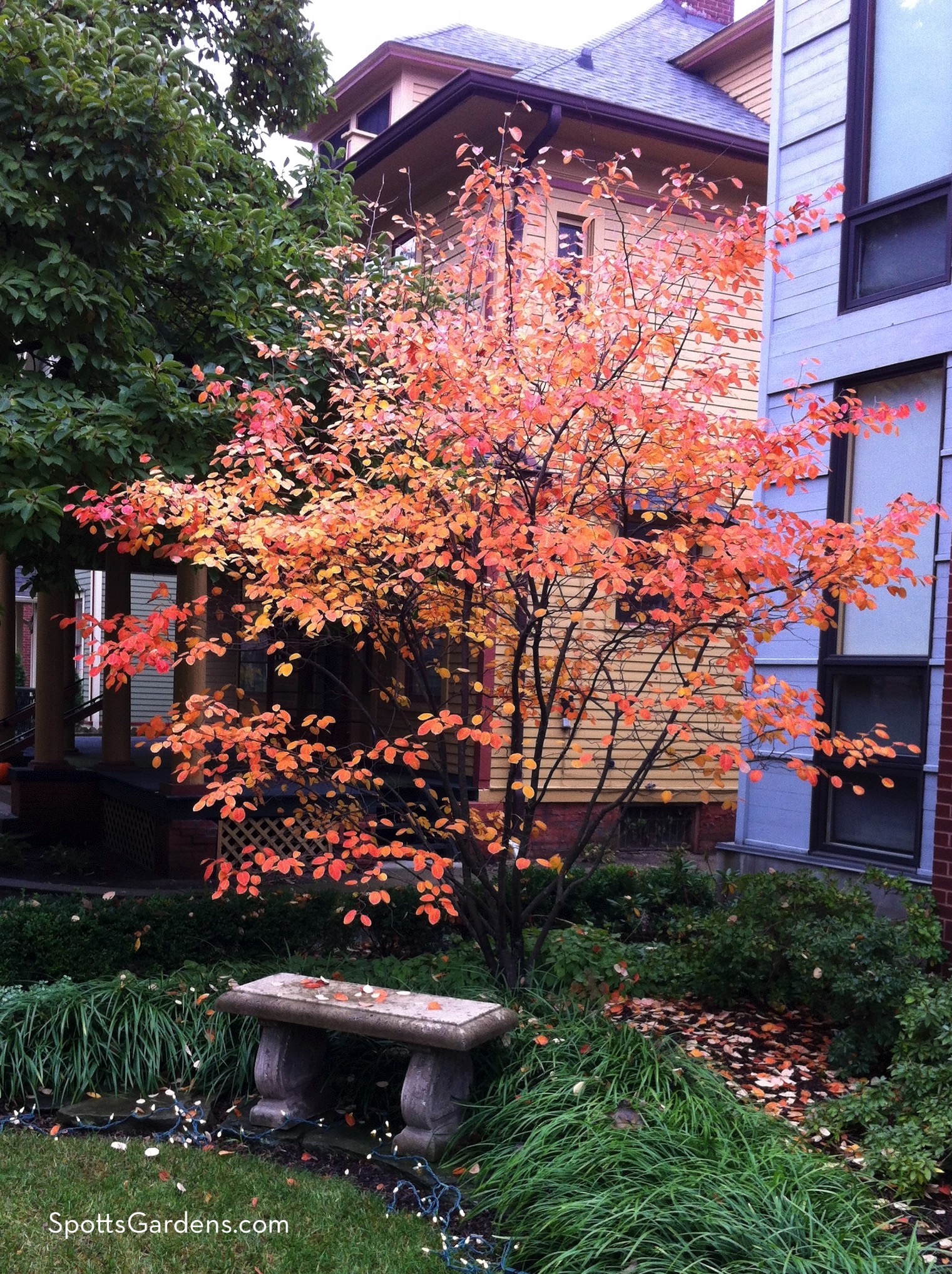 Close to the house on the west side, look for smaller trees and shrubs whose lower limbs are close to the ground. They’ll do a better job of blocking late day sun.

Plant your trees and shrubs so that when they are mature, they’ll be at least 12″ to 18″ away from the wall. In summer, this extra bit of insulating space helps keep the wall cooler. This space also ensures that air can circulate and plants won’t affect the foundation.

Shade More Than Just the House

Smaller trees and shrubs are also useful for shading walkways and outdoor seating areas. The more you can prevent hard surfaces from soaking up summer sun, the less heat they’ll radiate at night.

Use Vines on the South and West Side of the House

You can grow deciduous vines on the south and west walls of the house to shade the wall in summer. We recommend growing vines on a trellis, rather than allowing the plant to climb directly on the wall. It makes for much easier maintenance!

Or you might create a shaded seating space by building a pergola and planting it with vines. A pergola is an open-sided structure with a slatted roof that covers a walkway or patio. Planted with deciduous vines like wisteria (as shown in the photo below) it shades the window in summer but allows winter sun to shine through the slats. 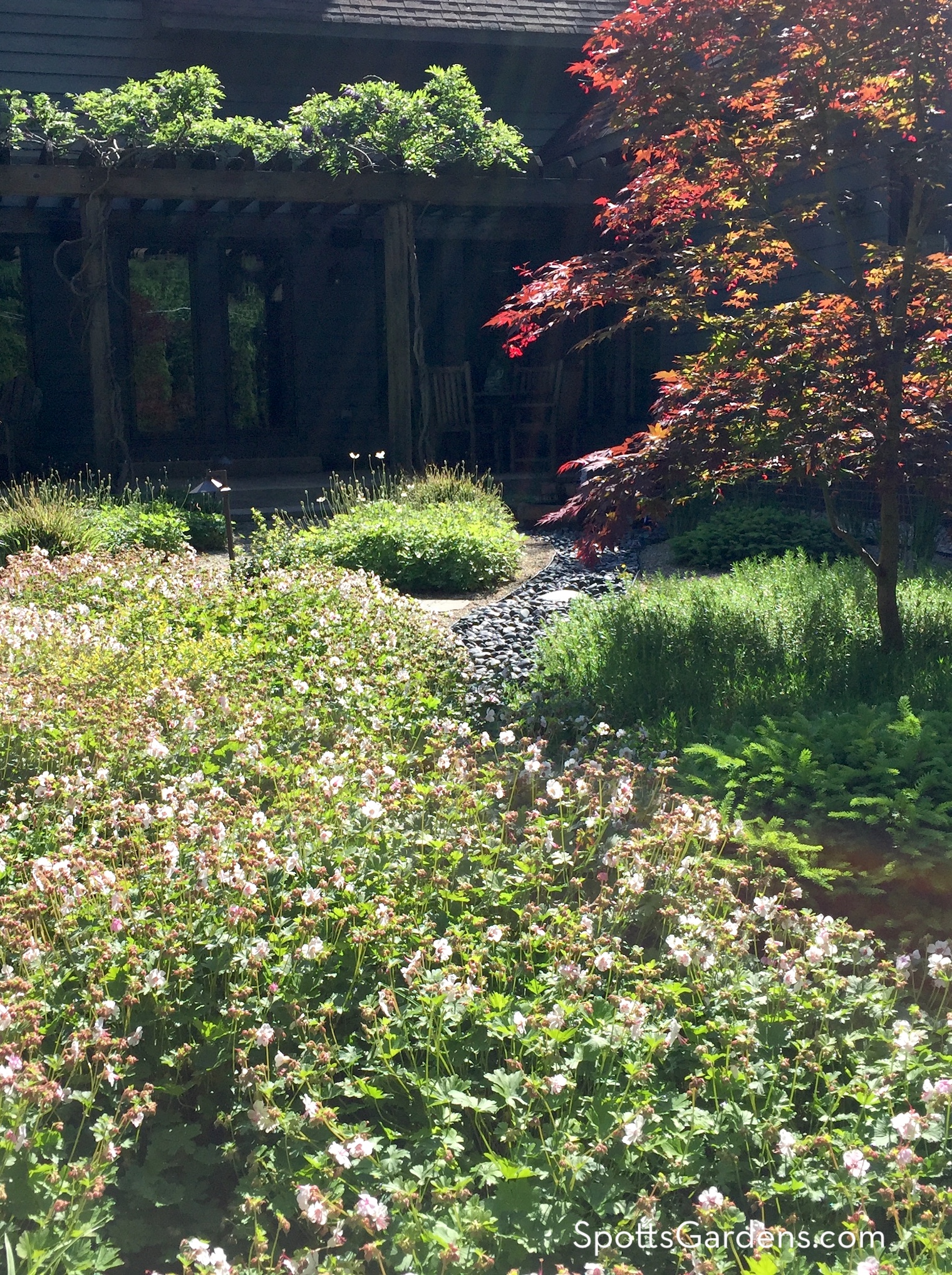 We can help you choose the trees, shrubs, and vines for maximum efficiency! Contact us to schedule your garden coaching.