Espalier in the Home Garden 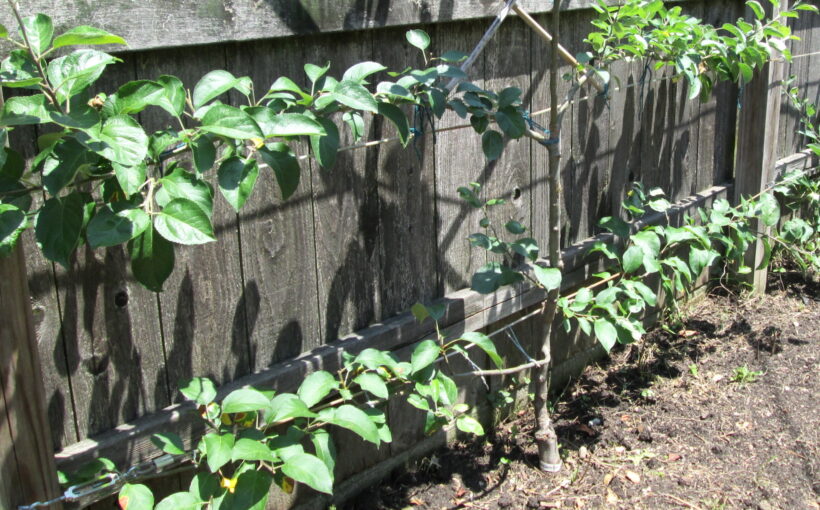 Espalier (es-PAL-yay) is the art of growing trees in two dimensions. Fruit or ornamental trees are trained to grow flat against walls, fences, or trellises, and are shaped into specific forms. With careful attention, fruit trees trained this way trees can turn out more fruit per square foot than freestanding trees.

We like to use espalier in small gardens to maximize fruit production and in formal gardens as a design element or focal point. Training and maintaining these trees is a high-maintenance technique that requires pruning at least twice a year. So if you’re looking for a low-maintenance garden, espalier isn’t a good choice!

The Cordon Forms For Apples and Pears

Classical espalier falls into several traditional forms. Of these forms, the easiest for a home gardener to use is the cordon, and the best fruits for the cordon are apples and pears.

In a cordon, the tree is trained to a single stem, which can be upright or at an angle. A cordon may have no branches and be grown at an angle, in which case you can pack a lot of cordons into one space and use it as a nearly opaque divider in the garden. Or it can have branches in a single tier (a “step-over”) or multiple tiers. 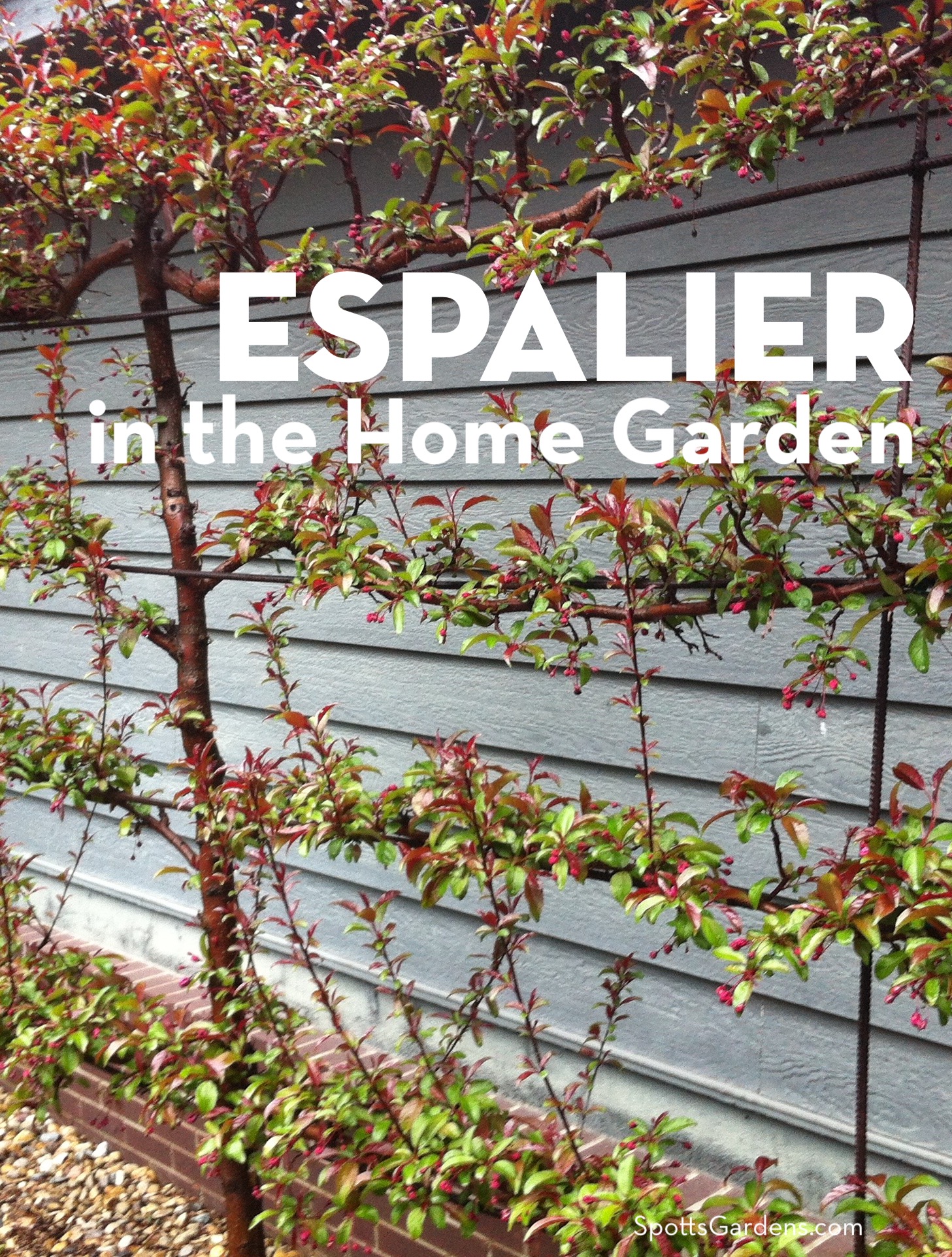 We’re fans of the multi-tiered cordon (also, confusingly, called the “espalier” form; seen above), which can be used to create a divider in the garden or a hedge against a wall. In this form, pairs of horizontal arms come off the single, center trunk, with each pair creating a tier.

Stone fruits, like peaches or plums, require different forms than apples and pears do. They are commonly pruned to a fan shape.

While you can buy trees that have already been pruned into an espalier, you have a much wider range of fruit varieties to choose from if you create your own.

To create an espalier form, it helps to understand how the shoots (one-year-old growth) on a tree grow:

To create an apple or pear espalier, choose a variety that is spur bearing. That means that its fruits develop on stubby little lateral shoots called spurs. The goal of the espalier is to restrict the growth of the tree to 2-dimensions while producing lots of spurs. See Chicago Botanic Garden for more. 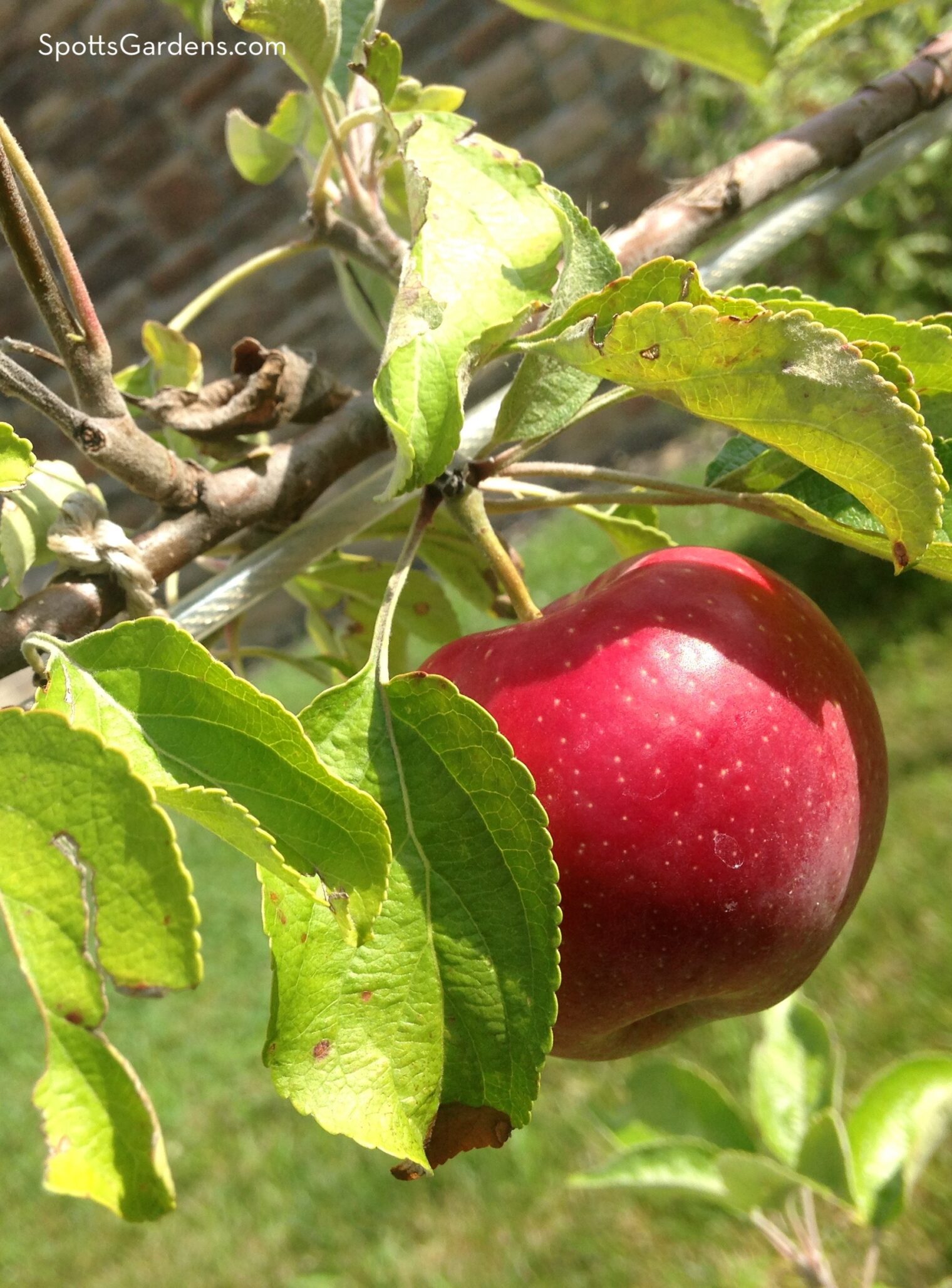 We prefer to use apple and pear trees (both European and Asian) on dwarfing or semi-dwarfing rootstock.

In central Indiana, planting is usually between mid-February and mid-March, before the tree has leafed out.

Because you’ve removed the tip-bud, lateral shoots will develop from the buds right below the cut. After a season’s growth, one of those shoots will become the leader, or central stem of the tree. Two others will become your first set of horizontal arms.

4. Train the Leader and Laterals (Year 1; midsummer to late summer)

You’re going to let these two lateral shoots grow at a 45-degree angle until they get as long as you want them. Then you can gently bend those lateral branches down and tie them to the first wire so they are parallel to the ground to create the horizontal arms.

It may take a year of growth for your laterals to get long enough, because branches growing at an angle don’t grow as fast as vertical shoots.

In central Indiana, we do this summer pruning after the summer solstice and no later than mid-September. 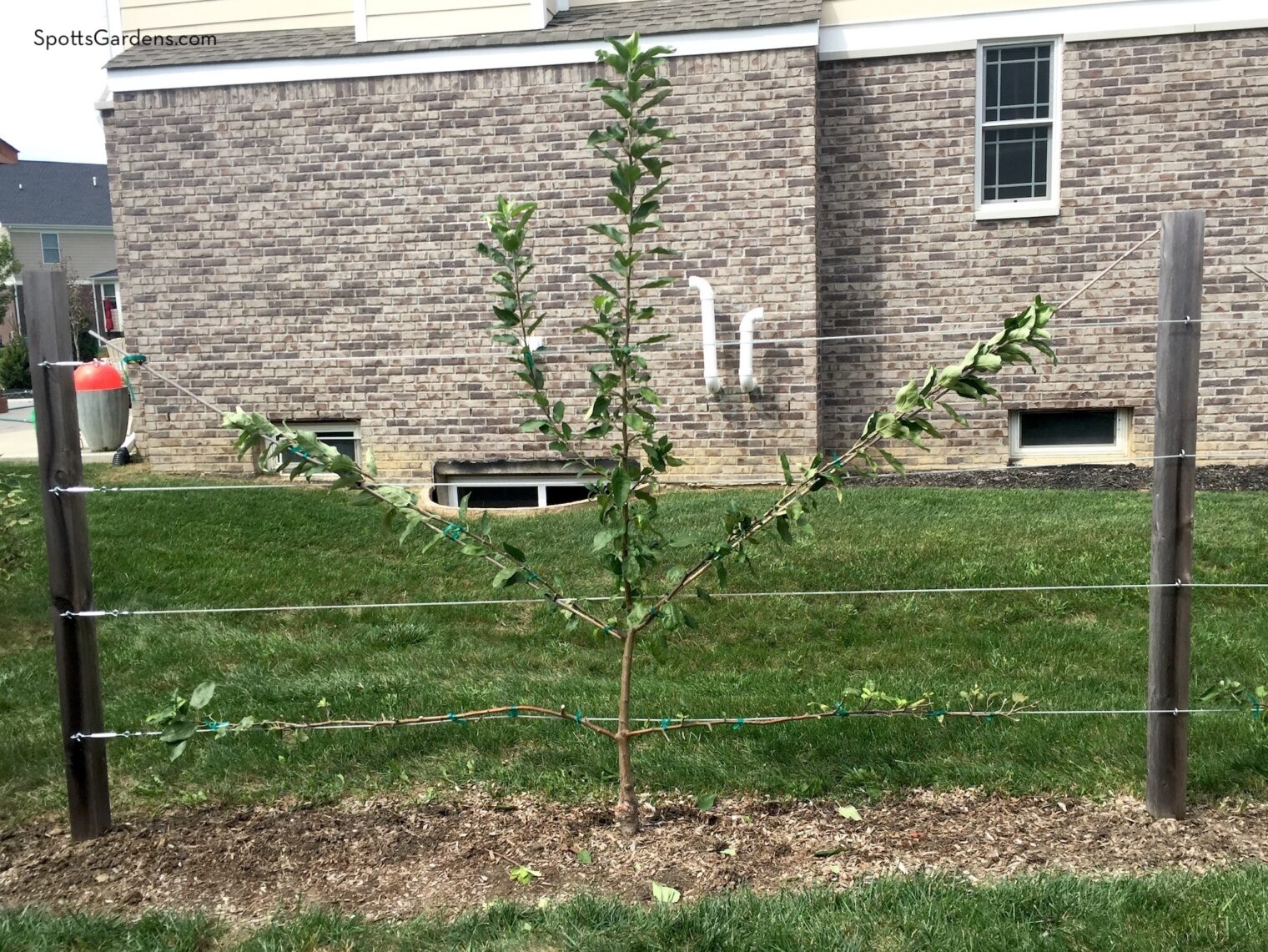 This dormant pruning is done after the worst of the freezing is over, but before the tree leafs out. In central Indiana, we dormant prune from about mid-February to mid-March.

6. Train the Leader and Laterals (Year 2, midsummer to late summer)

Espalier rewards patience and care, so plan for your espalier to take five to seven years to fruit. Get a good book to help guide your pruning. We like Grow Fruit, by Alan Buckingham.

We can help you choose, plant, train, and prune your espalier! Contact us today to discuss your options and get a free estimate.