To Shear or Not to Shear: Shearing Shrubs the Right Way 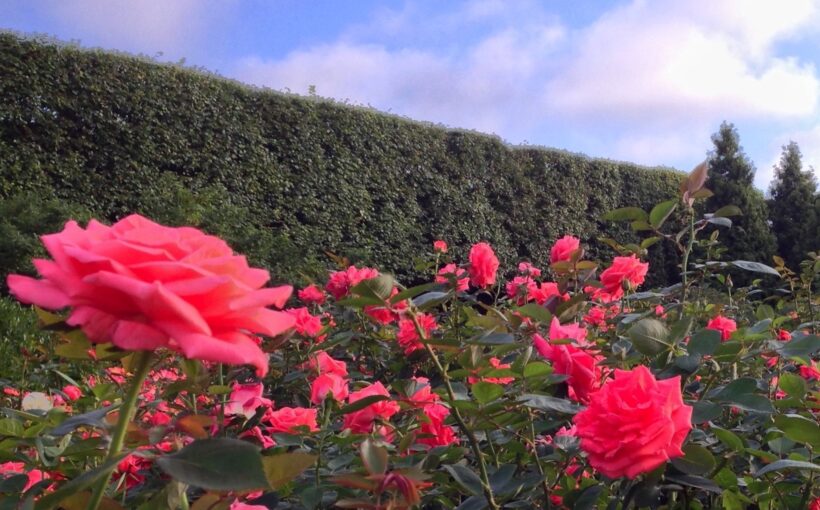 Despite the amazing variety in natural plant forms—columnar, spreading, vase-shaped—we see too many gardeners shearing all shrubs into gumdrops and balls. Put down the hedge trimmers! Instead, consider carefully whether you should shear those shrubs or not.

Shearing is a form of pruning that involves removing just the soft, new growth on the outside of woody plant. It can be done with electric hedge trimmers or with manual shears.

Shearing is used to change a shrub’s natural form into a different form of the gardener’s choosing. This technique is only appropriate for a handful of plants and in specific circumstances.

We use shearing primarily on formal hedges; those where shrubs (or occasionally trees) have grown into each other and been sheared into smooth, solid-looking forms. In Indiana, formal hedges are most often grown from yew, boxwood, or barberry.

We also shear when working with topiaries, which are shrubs shaped into designed forms. 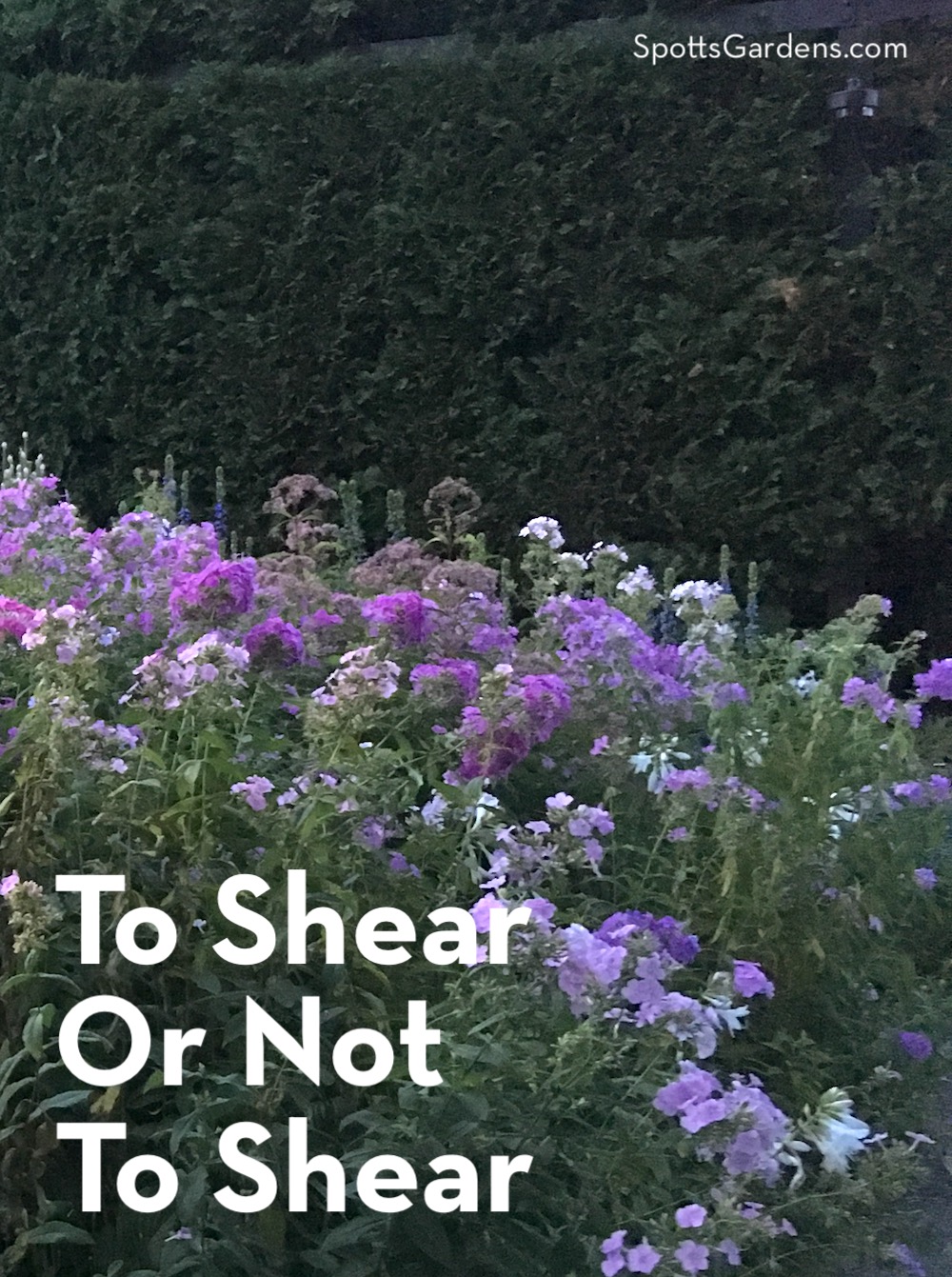 When we cut a woody plant like a tree or shrub, the plant sends growth hormones to the cut, resulting in new growth.

When shearing shrubs, we’re cutting the plant in several places with each pass of the shears. The shrub responds by pushing out a bunch of new growth at every one of those little cuts, so shearing results in a flush of new growth right at the surface.

That new, surface growth helps fill in the outside of the shrub to make a solid-looking shape. But as we continue to shear year after year, the growth on the outside eventually becomes so thick that it blocks sunlight from reaching the middle of the shrub. When that happens, the plant loses all its interior foliage.

This happens all the time with foundation plants. Homeowners will shear yews for 20 years, only to find that their shrubs have become too big and completely bald on the inside!

Most Shrubs Need Selective Pruning Instead

In selective pruning, the goal is to reveal or maintain the natural shape of shrub, not to change it. We remove individual branches or stems using bypass pruners and pruning saws. Don’t use shears to do selective pruning; they can’t handle the woody growth.

Because heading cuts are made to a bud or a joint, the plant has a natural place to push its growth hormones. That individual branch or bud will develop and grow, instead of a bunch of random new tiny branches. So the growth is much more controlled.

When we’re finished with this process, a shrub still looks like itself, just looser and shorter.

To Shear or Not To Shear?

So when you think about shearing shrubs this year, run through our list:

Is this a single shrub that loses its leaves in the winter?

It needs selective pruning, not shearing. Deciduous shrubs like burning bush, forsythia, and lilacs are much better looking (and better behaved) when they retain their natural shape.

Is this a group of shrubs that loses leaves in the winter?

Provided that you aren’t trying to make all the shrubs in this group merge into one solid-looking form (a hedge), prune each individual shrub selectively.

Is this an evergreen I want to be shaped into a ball, pyramid, or other form?

Boxwood and yew are commonly shaped into topiaries or individual forms with shearing. So go ahead and shear if you’d like.

But most other evergreens (including pine, spruce, firs, arborvitae, etc.) should not be sheared. Prune lightly, selectively, and only as necessary on these evergreens. Instead of shearing, choose an evergreen that will naturally take the form you want. For example, Thuja occidentalis ‘Mr. Bowling Ball’ is a naturally ball-shaped arborvitae.

Are the stems I need to cut woody?

Remember, shearing is only for soft, new growth. If the stems are woody, use pruners or saws to selectively prune.

Is it an informal hedge?

If you have a hedge of lilac, spirea, or other deciduous shrubs, you can use shears on the newer, thin growth to get it under control. You’ll still need to do selective pruning every few years to open up the center to light and air to renew growth.

Formal hedges can be converted to informal hedges, too. Boxwood and yew can look great when you allow their forms to loosen up. In this case, we use pruners to remove the occasional out-of-control sprout, but mostly just do selective pruning as necessary.

Is it a formal hedge?

Go ahead and shear it. Remember that shearing is going to encourage your hedge to put on new growth, and it grows fastest in spring. If you shear in spring, you’ll probably need to shear at least three times this year. If you hold off on shearing until mid-to-late summer, you’ll only have to shear once, or maybe twice.

Still plan to do some selective pruning every three years or so to make sure your hedge doesn’t become bald in the middle. 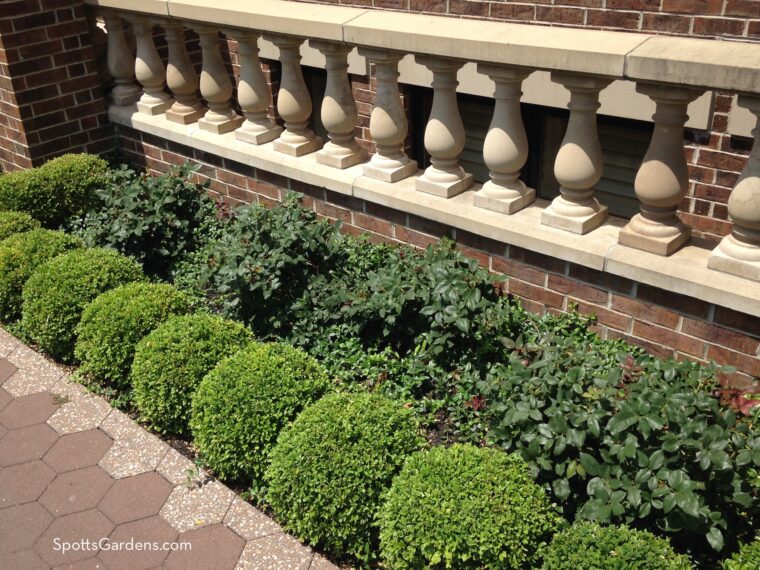 Whether your shrubs need selective pruning or shearing, the Spotts crew can do it for you! Contact us to schedule your garden visit.

Learn more about pruning with these other posts: